40 Years Ago Today: The Burning of The Steinberg Inn, one of Topeka’s few “Punk” clubs. 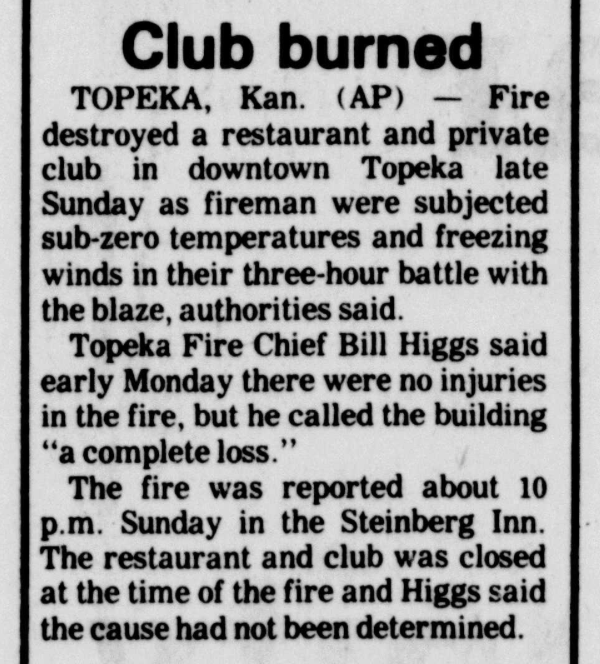 Im hijacking this from a post on the Kansas City punk and music group.

Frank Loose:  · Not KC–Topeka. The first–and only, for awhile–club that let punk bands play in Topeka burned on this day in 1982.

Despite having it’s own small punk scene in the early 1980s, Get Smart! never played in Topeka. One reason is that the only place allowing punk bands to play, The Steinberg Inn, burned down 40 years ago today, January 10, 1982. Maybe we’ll get lucky–there’s always (Places in NOTO, a new place out south is doing live music.)

And here is my commentary:

I remember the Stienberg! The first time I walked in there and saw the lattice and lath decor….I knew it was built to burn. It was right next to a bank that desperately wanted a drive-through downtown……
Well, they mysteriously got it! (I had heard that the owner was kinda sketchy as well)

I think the Stienberg was only open for maybe a year, or less. BUT it was NOT the only place in Topeka that let punk bands play! In fact it was probably the shortest-lived and least of the places.

There was Jitters up the street in the 900 block, upstairs that regularly punk bands (It was on the 2nd floor and also housed a Dance studio.) That was maybe 79-80 or 81. There was also Graffittis at 21st and gage next to “Tonys Tank ‘Em Up” that had punk bands (I know Slabs, Micronauts, etc etc came down and played multiple times) That building is torn down now and theres a KFC in roughly the same place now.

Topeka actually had a pretty happening scene from 79 through 85 or so. I did shows in the basement of the old Damme Dance Academy downtown (The original Lambda Lounge) downtown on 8th street from about 84 through 86 or 87 (As well as other rental halls and places that would let me do shows…at least once.

.And then there was college hill with 6-8 bars all in one little area and at any given time at *LEAST* one or two of them was doing live music, and was open to letting punk bands play there: Quincy MaGoos (Mr MaGoos) Lane Street Station, The Hills, Wizards, Oscars, Apple Jacks (Saw Abuse play there a few times…..once as I was walking up, Chris Garner (Guitar) Was standing out on the sidewalk playing, leaning against the wall smoking a cig and look so fucking cool as the rest of the band played inside.)

Im spacing some of the other bars names, but they where always changing names and owners. That was a GREAT scene until they moved the drinking age to 21 and got rid of 3.2 beer, and then you couldnt get into bars if you where under 21….luckily for me I just barely made the correct age when THAT happened!

But Id been sneaking into those bars since I was 14.

There was briefly “Buddies place” on Huntoon for about 6 months, they did some all-ages punk shows. There was Windjammers out at WHite Lakes Mall that did all kinds of stuff, but mostly ROCK (Kansas played there early on, but theres also these rumors that go around that The Clash played a “surprise last minute gig” there on their first US tour…but I think thats bullshit….interesting rumor though.

Im sure theres some others that Im spacing out on right now. Plus dozens of one-off basement and loft spaces or warehouses. I did a series of shows in North Topeka at the old Grant elementary school which had a really cool auditorium. (Slabs, Iguanas, Shup Bish, Klusterfux, Troubled Youth, and a couple of touring bands that my brain wont let me have right now….It was the Carpenters Union Hall at the time, and then some little assholes fucked the place up and trashed a bunch of shit, (Brad RObertson, spoiled little rich brat) so I lost my deposit and they chased me around for the next 5 years threatening to sue me for damages…..

I swear Ill write all this out some day. (Actually its all already been written out on various forums and groups…just need to gather it and spell-check it.) But I could usually get away with doing ONE show at a place and then the cops would catch on due to the “No fun club” group of shitty mothers who would find out about my evil satanic punk shows and make the cops come fuck up my shows and beat me up)

There was the PBG Hall in east Topeka where me and Jamie McCoy (Iguanas) did Black Flag, and DOA, and had some other big touring bands booked, but the owners of the club got the idea that there was big money to be made, and there was some minor vandalism that they wanted me to pay $500 bucks for (So just like the song goes: “Every week I need a new address…landlord landlord landlord cleanin up the mess, my whole fucking life is a wreck! We’re desperate! Get used to it!).

But really, compared to NOW, Topeka had a pretty decent punk scene back then…but ya gotta laugh because even back in 1984 we were hang-dogging and bitching about how “The scene was so much better in 80, or 82”.And it seemed like there was a sort of change-over: When Abuse broke up and reformed as Psychic Archie and became a little more pop-like, and the HARDCORE! stuff from the westcoast started to filter in, a lot of the earlier and older crowd seemed to kind of fade off and away….many moved to Lawrence, others went straight, some died, and I seemed to be in this ‘middle age group’ just slightly younger than Clay and Chris and Willie Dred etc, but several years older than this younger group of kids that where catching on to punk, and things changed, the scene changed.

And I liked it harder and faster.

But do not bother with the boobietrap. the owner is a fucking douchebag. And theres nothing “Truly legendary’ about that place…aside maybe from his rep and ripping people off. A few years back when he caught wind that Legs McNiel, someone he had no clue about had pronounced the Outhouse “The CBGBs Of The Plains”, the dip shit owner of the trap suddenly started telling people that The Trap was the “CBGBs Of The Plains”….until he realized that the only reaction he got for THAT was rolling eyeballs. If you really think you want to play Topeka, I can find you a better place to play, there are other places to play….it wont be worth your time, but at least you’ll have some dignity.

Below is a picture of where the Stienberg WAS. Conveniently right where that banks drive-through is (To the right of the anchor) it was almost directly across the street from Po Richards and Trader Dicks (Which was another place that had a tiny handful of shows in the basement.)What other clubs/venues (In TOPEKA) have I left out….Im not sure I want to include the shelter houses at Lake shawnee….that was kind of a different thing.https://goo.gl/maps/2pf6xULqkBdf4kW68