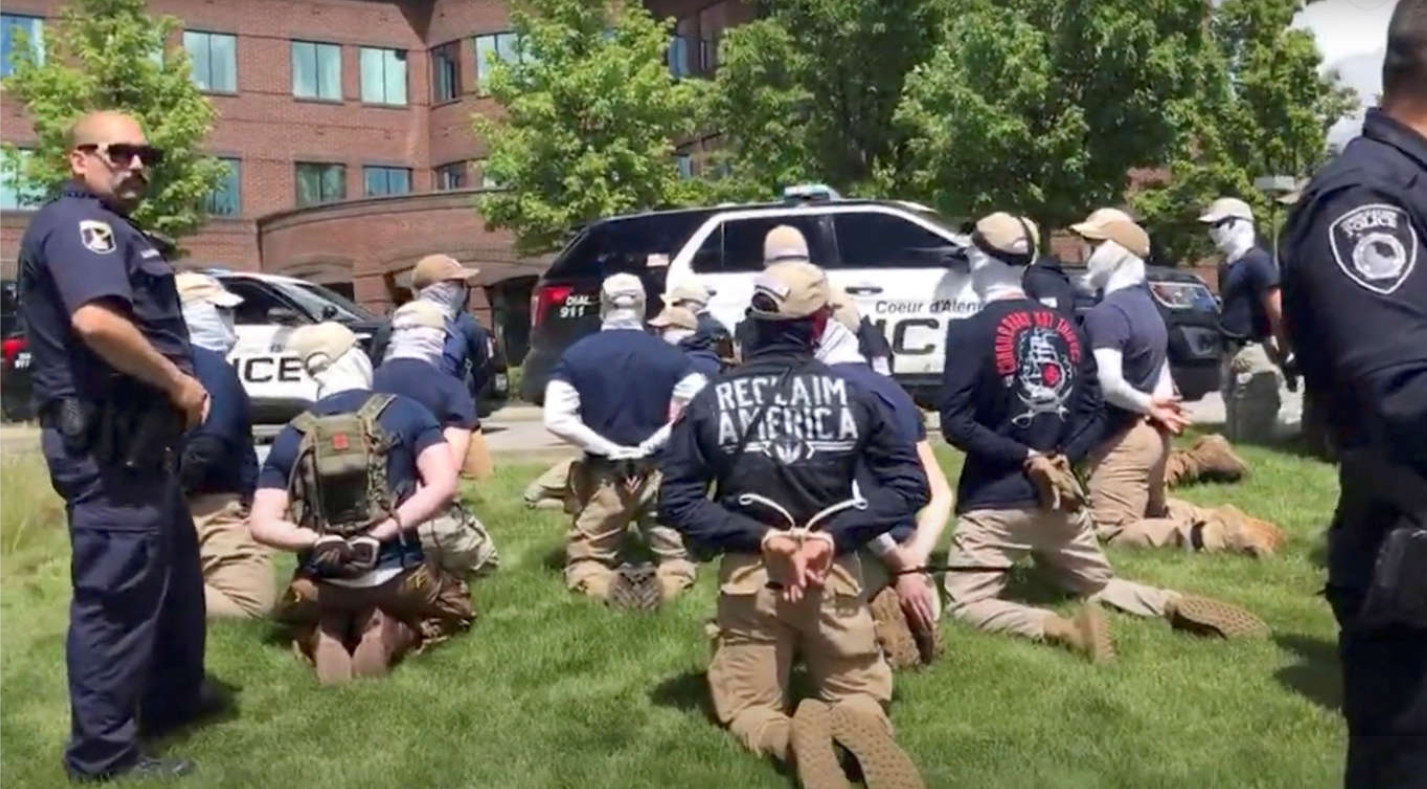 Many of those arrested were wearing logos from the Patriot Front, which rebranded after one of its members plowed his car into a crowd of protesters in Charlottesville in August 2017, killing anti-racism protester Heather Heyer.

Notice that the anti-Gay group in one of their released claimed that “the group would change its event name to “North Idaho Day of Prayer” in response. This is the exact same tactic and re-branding that Topeka racist white supremacist group “Blue Shield” used after their trip to Washington DC on Jan 5. They suddenly changed their tune, at least publicly, and claimed that they were a “Prayer group” and “Prayer warriors”, who had gone to the event to “Pray”. This is a typical tactic of christian-nationalist hategroups. The Topeka “Blue Shield” group is lead by disgraced ex-Topeka cop Ron Gish, several of their members where arrested by the FBI and charged with federal crimes shortly after the Jan 6th events.

Police in Idaho arrested 31 people who had face coverings, white supremacist insignia, shields and an “operations plan” to riot at a park hosting an LGBTQ Pride parade on Saturday afternoon, police said. Many were wearing logos from the Patriot Front, a white supremacist group. The group’s founder was among those arrested.

Authorities received a tip about a “little army” loading into a U-Haul truck at a hotel Saturday afternoon, said Lee White, police chief of Coeur d’Alene, Idaho, a city of about 50,000 near the border with Washington state. Local and state law enforcement pulled over the truck about 10 minutes later, White said at a news conference.

Many of those arrested were wearing logos from the Patriot Front, which rebranded after one of its members plowed his car into a crowd of protesters in Charlottesville in August 2017, killing anti-racism protester Heather Heyer.

The group’s founder, Thomas Ryan Rousseau, was among those arrested, according to jail records. Like the others, Rousseau was arrested on a charge of criminal conspiracy to riot, a misdemeanor. The arrestees were held on $300 bail.

In photos and videos posted on social media, a group of men dressed in hats, sunglasses, white balaclavas and Patriot Front’s signature khaki pants were seen kneeling on the ground with their hands zip-tied behind their backs as police officers kept watch.

White said the people were headed to City Park, which was hosting Pride in the Park. Organizers for the event did not immediately respond to telephone and email requests for comment from The Washington Post on Saturday evening but wrote in a post to the group’s Facebook page that it was a “successful” event. The group, North Idaho Pride Alliance, urged people to “stay aware of your surroundings this afternoon and evening” in the city.

Authorities had been aware of online threats leading up to the weekend, White said, so police had increased their presence in downtown Coeur d’Alene. Two SWAT teams and officers from the city, county and state assisted in the arrest.

Nearby, the Panhandle Patriots, a local motorcycle club, had organized a “Gun d’Alene” event on the same day as the pride event to “go head to head with these people,” an organizer for the event said in a video last month.

A press release on the group’s website encouraged the community to “take a stand” against the LGBTQ “agenda.” The release also suggested without evidence that “extremist groups” were trying to hijack the event to provoke violence and said the group would change its event name to “North Idaho Day of Prayer” in response. Reached by phone late Saturday, a representative for the Panhandle Patriots declined to comment on the day’s events.

White, the police chief, noted that the authorities’ understanding of the situation was still developing. He did not mention a connection between the Panhandle Patriots event and the arrests.

He said those arrested had come from several states “to riot downtown,” with riot gear, at least one smoke grenade and documents “similar to an operations plan that a police or military group would put together for an event.”

He did not see firearms at the scene of the arrest, he said, but stressed that the situation was “very fresh. We haven’t begun to do interviews.” However, firearms were present in the vicinity of the park, White said.

More information from officials probably will not come until “Monday at the earliest,” White said, but more charges are possible. Kootenai County Sheriff Bob Norris said their first court appearances would likely be on Monday.

White said police had been in touch with the FBI “all day.”

The Southern Poverty Law Center describes the Patriot Front as a white nationalist group that broke off from a similar organization, Vanguard America, in the aftermath of the deadly “Unite the Right” rally in Charlottesville, Virginia in 2017.via REUTERS