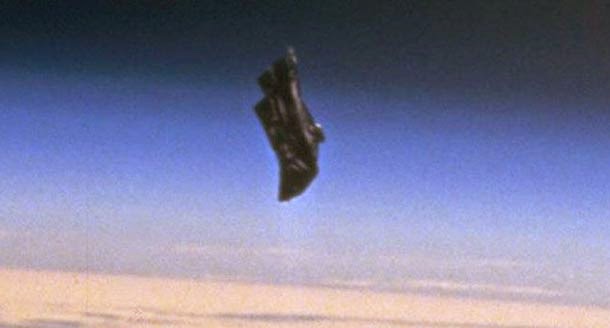 Take a good look at the photograph above. NASA captured this image of a mysterious black object orbiting the Earth in 1998, during the first Space Shuttle mission to the International Space Station (ISS).

The space agency refers to the strange entity as item STS088-724-66 in its catalogue of space junk floating in low-Earth orbit (within 1,200 miles). Jerry Ross, an astronaut who took part in that mission, says that the object is a wayward thermal blanket that broke loose while his team tried to attach an American module to a Russian module on the ISS. But for a small, devoted following, it’s a 13,000-year-old, artificially made satellite known as the Black Knight satellite. So, could this peculiar object really have come from ancient aliens? Or is it just an innocuous piece of space debris?

The facts surrounding the Black Knight are cobbled together from a number of tales. It begins with Nikola Tesla, who said that he had received radio signals from space during his 1899 radio experiments in Colorado Springs. Martians, he believed, were attempting to communicate with humans through numbers, since they’re a universal language.

In a February 1901 Collier’s Weekly article, Tesla recounted his experience: “The changes I noted were taking place periodically and with such a clear suggestion of number and order that they were not traceable to any cause then known to me… The feeling is constantly growing on me that I had been the first to hear the greeting of one planet to another.”

Black Knight truthers cite this as the first sign of their satellite, which sent the radio pulses. Scientists have since determined that those radio pulses were most likely naturally occurring signals that space objects emit while in orbit. The prevailing theory, while still unlikely, is that Tesla heard a pulsar, or a faraway celestial body that emits regular pulses of radio waves. Sure, the Black Knight could have emitted such pulses, but that still doesn’t make it alien in nature.

Still, the theory that aliens were communicating with Earth through radio pulses propagated even further in 1927 when civil engineer and ham radio operator Jørgen Hals stumbled upon an unusual quality to his radio signals. As he transmitted from his home in Oslo, the signals would unexpectedly return to him moments later. Hals perceived this as an alien phenomenon.

Nearly 50 years later, an article in Analog Science Fiction and Fact tried to make sense of Hals’s radio echoes. The author, Duncan Lunan, posited that a 13,000-year-old object orbiting the moon could have led to the long-delayed echoes (the 13,000 figure having to do with the positioning of the North Pole star, Polaris). “I tried plotting the delay times against the order in which the echoes were received…and at only the second attempt I found what looked like a star map,” Lunan said in 1998. However, we now recognize those signals as “long-delayed echoes” that you can hear about 2.7 seconds or more after a radio transmission. And Lunan has since distanced himself from the Black Knight theory.

One more bit of disjointed speculation: In 1960, TIME published a story noting that the U.S. Navy had detected an unidentified satellite that may have been a piece of Soviet spy technology. It turned out to be a broken-off piece of the Discoverer 5—an early U.S. photo reconnaissance (spy) satellite—but believers still point to this as definitive proof.

Like any good conspiracy theory, the Black Knight satellite has a few fun hooks, plus some high- profile boosts that add a sheen of credibility to the story. In 1963, for instance, Project Mercury astronaut Gordon Cooper supposedly reported seeing a UFO during his 15th orbit while aboard the Faith 7 spacecraft, according to the U.K.’s Armagh Observatory and Planetarium. Never mind that Cooper has since produced transcripts to the contrary, stating that he never saw an alien spacecraft during that particular mission—Black Knight devotees still include this history in the conspiracy theory origin story.

But the Black Knight satellite is almost certainly the series of discrete events that explain it away: Tesla hearing pulsars or some other natural signal, Hals receiving an echo, TIME reporting on a secret U.S. government satellite in good faith, and the astronauts of the ISS seeing a lost blanket in orbit.

From a psychological perspective, it makes sense that people want to believe in the Black Knight satellite, says Alice Gorman, Ph.D., an associate professor at Flinders University in Adelaide, Australia, who studies space archaeology.

Dr Space Junk vs The Universe: Archaeology and the Future (The MIT Press)© amazon.com

“It’s astonishing that there aren’t more conspiracy theories about stuff in space,” she says. “It’s really difficult to see details on stuff in Earth’s orbit, even through really high-powered telescopes. So when you can’t see it, then you can imagine anything about it.”

While NASA and other space organizations keep catalogs of the space debris that they encounter, these lists are still incomplete and dependent on nations sharing sometimes sensitive data.

“There’s stuff that might have a catalog number, but we don’t actually know what it is,” she says. “That makes it a bit easier to say, ‘Well, here’s this mysterious object that comes from somewhere else.’”

As for the photo that supposedly depicts the Black Knight? Gorman says that because the image shows a large cross-section of the thermal blanket in orbit, it looks to the human eye like a large, solid object. That means the image could be nothing more than an optical illusion, which isn’t too shocking when you consider that people also commonly mistake birds and airplanes for UFOs, she says.

And there’s still this glaring hole in the Black Knight satellite conspiracy theory: How exactly does an object stay in orbit for 13,000 years? “You have to use fuel and have rocket engines and stuff to just stay up there… Is this some amazing new propulsion system that we don’t know anything about yet on Earth?” Gorman wonders.

NASA captured this image during the STS-88 Space Shuttle mission while 246 miles above the coast of Namibia and looking north.

🛸 How the Black Knight Could Exist

Let’s pretend for a moment that the Black Knight satellite really does exist. How could it slip by unnoticed for 13,000 years? Gorman has a few ideas. The first: mimic one of the small pieces of space junk that are no larger than 10 centimeters in size—space organizations exercise more scrutiny over larger objects. “We’re going to assume that aliens have much more advanced technology than us, so something [that size] could be just as advanced as something the size of a house.”

To avoid collisions with other scraps of space junk, aliens could develop miniaturized force field technology to keep their probe from getting hit, Gorman says. And thinking long-term, there’s the possibility that Earth could eventually have its own ring system—made up entirely of space junk in the “graveyard orbit,” about 190 miles above most working satellites. If and when that day comes, the Black Knight will have a decision to make, Gorman says: “Will it join this ring and risk detection, or run away and hide?”