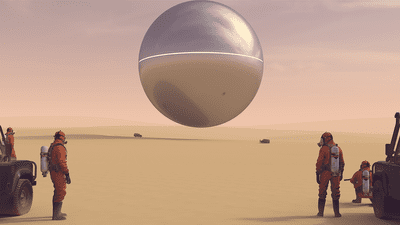 According to reports, the sphere has a code on the outside.

Fans of mysterious chunks of metal rejoice: a big metal orb has been found in Mexico, prompting people to speculate it’s part of an alien spaceship (as well as some much more grounded guesswork).Top Stories00:5701:12

The orb – which meteorologist Isidro Cano described in a Facebook post as “a very hard plastic or an alloy of various metals,” – showed up on the top of a tree just north of the city of Veracruz. According to Cano, witnesses saw the orb “falling from the sky,” making a noise but no fire.

Writing in alarming all caps, he explained that people should “NOT TOUCH OR COME NEAR IT UNTIL IT HAS BEEN REVIEWED BY A SPECIALIST,” adding “IT MAY HAVE RADIOACTIVITY”.

In a follow-up post, he referred to a “code” on the outside of the orb and reiterated that it “SHOULD NOT BE OPENED”, despite also claiming that there are no obvious openings where the orb could open.

Adding further mystery to what the orb is, he claimed that the spheres “ARE TIMED SO THAT AT SOME TIME THEY WILL OPEN ON THEIR OWN AND SHOW THE VALUABLE INFORMATION THEY BRING WITHIN THEM”.

On Monday, Cano updated his followers to explain that the “artifact” had been removed at 3:15 am local time by a highly trained and specialized team, to be taken out of the borders of Mexico.

As for what it was, a reasonable guess is that it could have been a weather balloon, or – if you’re going to be exotic – genuine space debris. Over the weekend, China’s Long March 5B rocket fell back to Earth, with pieces found in Borneo as well as the Philippines, while earlier in July an Australian farmer found a large chunk of what appears to be part of a SpaceX rocket. so it’s not out of the realms of possibility.

Though his followers preferred theories ranging from UFOs to dragon eggs, Cano also favored the space junk theory, in his initial post at least.

“TO MY CONSIDERATION IT MAY BE PART OF THE CHINESE ROCKET THAT WAS OUT OF CONTROL AND THAT LARGE NUMBER OF PARTS WERE SEEN TO LAND IN MALAYSIA ON THE OTHER SIDE OF THE WORLD,” he wrote.

But that’s what an alien and/or dragon egg would want you to think.